"With or without horse slaughter, horse rescues  need our help and support. That can involve financial donations,  volunteering, or even donating items like brushes and blankets. Horse  rescues operate with little money, so every little thing you can do to  help goes a long way." ~ Bo Derek

Say something interesting about your business here.

What's something exciting your business offers? Say it here.

Give customers a reason to do business with you.

Say something interesting about your business here.

What's something exciting your business offers? Say it here.

Give customers a reason to do business with you.

Check out this great video

Beauty aka Away She Go

An underbite (undershot jaw, sow mouth, monkey mouth) is a case in which  the lower jaw (mandible) protrudes out further than the upper jaw  (maxilla), causing the lower teeth to protrude forward. It may result  from a congenital defect (common in miniature breeds), or from injury or  trauma to the lower jaw. An undershot is a situation in which the  nipping teeth dont meet but the cheek teeth do. A true underbite  involves abnormal occlusion of the cheek teeth too, and the  development  of overgrowth of  unopposed teeth.


In mild cases, horses can  process forage just fine. However, sometimes this condition results in  uneven wear on the teeth and the development of overgrowths of the  molars (cheek teeth) that can inhibit proper grinding.


If your  horse has an underbite, your vet should perform regular dental exams to  determine whether dental maintenance is required.  https://horsesidevetguide.com/drv/Observation/569/underbite-lower-jaw-protrudes-forward-in-adult/

Seen by the vet & wrapped

Slowly it starts to heal

Tissue fills in the gaps and closes the wound

painless because granulation tissue does not have any nerves or nerve endings.

Good with the herd

Sweet gentle and ready for a family

Amazing how its even growing hair back. More healing is needed , but it will continue to improve.

listen)) or charrería (pronounced [tʃareˈɾi.a]) is a competitive event similar to rodeo and was developed from animal husbandry practices used on the haciendas of old Mexico. The sport has been described as "living history," or as an art form drawn from the demands of working life.[1] In 2016, charrería was inscribed in the Representative List of the Intangible Cultural Heritage of Humanity by UNESCO.[2]

Evolving from the traditions brought from Spain in the 16th  century, the first charreadas were ranch work competitions between  haciendas. The modern Charreada developed after the Mexican Revolution when charro traditions were disappearing.  The competing charros often came from families with a tradition of Charreria,[3] and teams today are often made up from extended families who have been performing for up to five generations.[4]

The charreada consists of nine events for men plus one for women, all of which involve horses, cattle or both.[5]  Some of the events in the charreada have been criticized by animal advocacy groups and some states have banned certain events.[6]   However, there is an absence of independent statistical data and  unbiased recording of the injury rate of animals has not been  undertaken.

The charreada itself consists of a number of scoring events  staged in a particular order—nine for the men and one for the women. Two  or more teams, called asociaciones, compete against each other.  Teams can compete to become state, regional, and national champions. The  competitors are judged by both style and execution.

Unlike rodeos, most charreadas do not award money to the winners as charreadas  are considered an amateur sport, not professional. Under Mexican laws  it would be illegal to receive a monetary reward for participating in a charreada. At times there are such prizes as saddles or horse trailers. 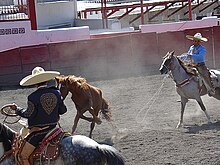 Various aspects of charreada have been criticized by animal welfare groups in the United States as being inhumane. While some animal rights organizations oppose many or all aspects of both charreada and American-style rodeo,[12]  other organizations do not oppose rodeos generally or the charreada  events that are similar to those seen in US rodeo.  However, they do  oppose specific charreada events, particularly steer-tailing and those  that involve roping horses, which are grouped under the term  "horse-tripping."[12]

These organizations have particular criticism for piales and mangana, the heeling and two forefooting events that involve roping of horses,[13][14][15][16]  where they claim that the horses used will often sustain injuries,  including broken bones and teeth, dislocated joints, and lacerations.[13]  The distinction claimed between Manganas, or horse-tripping, and events that rope cattle, such as calf roping,  is that the high center of gravity of a horse, the longer legs and  faster speed of a horse creates greater potential for injury, whereas  cattle are smaller, have a low center of gravity, are slower and have  sturdier limbs.[13]   There are additional concerns that horses are underfed and overused, repeatedly roped until lame, with rope burns down to the bone.[16]

forefooting is not permitted in motion pictures monitored by the American Humane Association.[17]   The California-based Charros Federation USA states that it has  voluntarily banned horse-tripping in mainstream charros for over 15  years.[18]   They also note, however, that the complete capture in mangana was not  stopped due to a belief that there was an unreasonable danger to the  horses used, but so teams from California would not be at a disadvantage  when they competed in the United States, after a 1994 California law  stopped the take down in mangana. Under the Federation rules, the  complete capture is still permitted in Mexico.[19]

Nine  US states,[20]  including the southwestern border states of Texas, California, New  Mexico and Arizona, have banned horse-tripping as a sport, although  horses may still be roped and taken to the ground when required for  veterinary care, identification and branding; or essentially, reasons  other than entertainment.[21]  In 2011, the state legislatures of Oregon and Nevada considered but did not pass bills that would have stopped horse tripping,[22]  and, in Colorado, a bill intended to ban both horse-tripping and steer-tailing also failed.[18]

There are also concerns about the steer tailing event, due to  concerns that a steer can suffer injuries to his tail, but also his back  and limbs as he rolls.[23]  Legislation to ban steer tailing, which also is an event seen in some rodeos, was introduced in at least two states.[12]

Supporters of Charreda defend the sport, stating that there is  little evidence to support claims of inhumane treatment and noting that  few animals are seriously injured. The Charro Federation has stated that  experienced Charros know how to properly rope a horse without injuring  it.[14]  The Charros Federation USA notes that fringe groups who do not follow  mainstream standards give a bad name to the whole community.[18]  Supporters point out that events sanctioned by the Federación Mexicana de Charrería (FMCH) are held in both the United States and Mexico, and they operate under rules promulgated by the Federation.[24]  They also point to successful and highly public events such the Fiesta  San Antonio, where Charreada has been an integral part of the festival  for more than 60 years.[25]

There are few hard statistics on either side of the issue.  Many  charreadas are loosely organized in the USA and obtaining data is a  challenge.[13]  Informal reports by organizations on both sides of the issue exist.   The American Horse Defense Fund claims that from 8 to 20 percent of  horses leased for charreada in California were reported to be injured  seriously enough to be "sent to slaughter" each week,[13]  and the president of the California Equine Council claimed to  personally observe a circuit of 10 charreadas for which 78 horses were  leased for a season's use, and only 2 were not sent to slaughter by the  season's end.[16] Arabian horses are said preferred by charros due to their lighter weight,[16]  and Arabian horse rescue organizations have reported on encountering  rope-scarred animals in slaughter yards whose injuries have been  attributed to charreada use by the feedlot owners.[26]

Charro associations question the legitimacy of these reports and lack of hard data.[27]   In 2011, Charreada organizers in Texas began keeping statistics on  injuries to both animals and charros for events sanctioned by the FMCH.  Since that time, they have self-published results from 1035 charreadas.  624 of which were held in Mexico, where traditional mangana, piales and  cola events are offered. 411 charreadas were held in the United States,  with non-traditional manganas, but traditional piales and cola. There  were also an additional 10 coleaderos. They have reported 10 injured  Charros, two steers with horns broken, three steers had tails broken in  cola, one steer losing the hair at the end of its tail, one steer's leg  broken in cola. A horse started limping after hitting a wall in Paso,  but the lameness resolved a few hours later. A horse pulled a ligament  in cola. One horse was killed when it flipped in a bucking event. In the  Charreadas and Coleaderos, held in Mexico, 6601 steers, 18059 horses  and 2009 bulls were used. In the Charreadas and Coleaderos held in the  United States 4570 steers, 3905 horses and 1216 bulls were used.[28]

In comparison, the  Professional Rodeo Cowboys Association  (PRCA) reports an animal injury rate of less than one percent in its  sanctioned US rodeos.   However, The Charro  Association notes that the  PRCA only sanctions about 30 percent of all US rodeos,[12] Unsanctioned rodeos may have higher abuse and injury rates, and the ASPCA notes that rodeo practice sessions are often the location of more severe abuses than competitions.[29]  Likewise, anecdotal reports suggest the worst charreada abuses in the  USA occur at events held in small venues with little public notice, and  the deepest concerns are directed these unsanctioned events.[30]   The problem appears to be most often reported in California, where  horse-tripping is banned, yet private "backyard" events still feature  these events.[16]

.....Supporters of the mangana and piales events argue that catching horses  by their legs has been and is a legitimate method of animal husbandry  and therefore part of a celebration of traditional ranching methods of  Mexico. This is evidenced by the veterinary and ranch work exemptions in  the California, Arizona, New Mexico and Texas statutes.[24][32]  They also note the inclusion of mangana and piales in Charreada rules  promulgated by the FMCH as proof of the tradition of catching horses by  their legs

The legislative debate in California in 1994 brought this issue to  the forefront.  When the bill banning horse-tripping passed, there was  concern that the legislation was part of an overall anti-immigration  climate that the voters in California were generally favoring at the  time.[35]   However, support from organizations such as the Mexican American  Political Association, the Mexican American Chamber of Commerce, the  United Farm Workers (UFW) and the International Longshore Workers Union  helped procure passage of the bill.[31]

When horse-tripping legislation was debated in California, the sponsor of the original bill was Joe Baca, an Assemblyman of Mexican descent who went on to become a member of the U.S. Congress.[36]   When the initial bill was submitted by Baca,  it was criticized as  discriminatory by other Mexican American Assembly members such as Richard Polanco.  The original bill was defeated, but was resubmitted during an emergency  session of the legislature.  Assemblyman Baca did not sponsor the  resubmitted legislation, instead it was sponsored by a non-Hispanic  member, John Burton.[35]  However, unlike the situation in Arizona, during the debate leading to  the ban enacted in 1994, the California Equine Legislative Counsel  presented testimony that individuals such as Cesar Chavez and organizations including the Mexican American Political Association opposed horse-tripping as a "cruel cultural anachronism.

The Professional Rodeo Cowboys Association (PRCA) does not take an official position on Horse tripping, as is not a sanctioned event.[37]  The California-based Charros Federation USA states that it has  voluntarily banned horse-tripping in mainstream charros for over 15  years.

In 2011, SB 613, a bill to stop "horse tripping" was submitted in Oregon.  This was opposed by the United Horsemen. "They were joined by other SB  613 opponents, including the American Quarter Horse Association, the Oregon Quarter Horse Association, and the PRCA.  Other opponents included the directors of the Pendleton Roundup plus other rodeo directors and supporters. The bill did not pass.